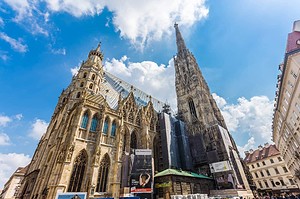 If someone had asked me three weeks ago how I thought the end of my summer would go, I might have given a few good guesses – studying and performing in the world's classical music capital, enjoying a delicious Wiener schnitzel fresh off the stove, or perhaps hiking up breathtaking mountains. However, unbeknownst even to me at the time, it was destined to take a much more tumultuous turn that would drastically alter my plans.

For almost a year, I have aimed to attend the University of Music and Performing Arts Vienna’s International Summer Academy this August. I have family history in Austria and have been learning German for years, so this was the perfect opportunity for me to further my musical understanding while immersing myself in another culture that I loved. Plus, the food is to die for. I planned out the repertoire I would need far in advance, recorded the application video this Spring, and sent off my finished application with high hopes and crossed fingers. Come June, months of impatient waiting were rewarded in due: I had been accepted! In the months that followed, my family made reservations for the trip, reserving plane tickets, hotel rooms, and train tickets. All in all, the ordeal was shaping up to be a wonderful adventure that I couldn’t wait to embark upon.

About a week and a half out from our date of departure, I was putting a few finishing touches on my repertoire when I felt a small pressure on the left side of my chest. I figured it was nothing, as who hasn’t had a minor physiological oddity from time to time? Wait it out and it should be gone by the end of the day, I thought. Well, end of the day rolled around and it had only increased in intensity, especially when I went on a walk after dinner. We figured it would be good for me to see a doctor in the small chance this was something more than an ache, as it wouldn’t be good to be in serious medical condition overseas. And boy, it is a blessing we did. I had a spontaneous pneumothorax of my left lung. In other words, a couple centimeters of my left pleural cavity had filled with air, causing the lung to collapse. This sprung from nowhere, and for no apparent reason. Pneumothoraxes are normally caused by blunt force trauma to the chest, something I usually try to avoid, so I am completely at a loss as to what caused it. (The doctor mentioned something about it being more common in tall thin males. Oops!) Unfortunately, it turns out that one shouldn’t fly until six to eight weeks after a pneumothorax healed, as decreased cabin pressure makes any air including unwanted air in the pleural cavity expand, which could cause greater lung collapse and potentially even mortality without immediate medical intervention. That would have been very bad, especially over the Atlantic Ocean where there are very few places to make an emergency landing, and even fewer adequate medical personnel to intervene. And so, I have been forced, seemingly by Fate, to miss the Summer Academy, waiting for the lung to heal itself. However, if I hadn’t had the doctor’s visit scheduled, things could have been much worse.

Moral of the story: if you are doing something that causes you pervasive acute physiological distress for no apparent reason, Stop it. Get some help.