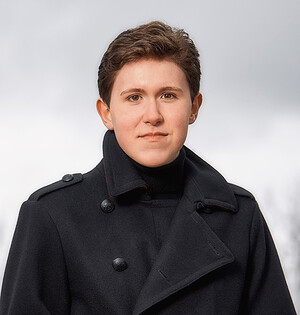 Seventeen-year-old pianist Gavin George began formal instruction at age three-and-a-half and made his concerto debut at age seven performing Haydn’s Concerto in D Major. As a gold medal winner for two consecutive years in the American Association for the Development of the Gifted and Talented International Piano Competition, George performed multiple times in Carnegie Hall and was awarded a full scholarship to study and perform at the Vianden Music Festival in Luxembourg. He became the youngest musician to perform on the Emmy-award winning show From the Top, broadcast on NPR, and was awarded first prize in the SAA's International Piano Concerto Competition performing Beethoven’s Concerto No. 3. With sponsorship from PNC Bank, “Gavin George: Live on Your Screen” streamed his performance of Rachmaninoff’s Concerto No. 1 with the Westerville Symphony Orchestra. Chosen by the Cleveland Women’s Orchestra to be featured in their 79th Anniversary Concert, George performed Mendelssohn’s Concerto No. 1 in Severance Hall, Cleveland. He was selected as one of the PRODIGIES series documentary profiles appearing on the YouTube THNKRTV channel, has been a performer on both the CBS Early Show and The Queen Latifah Show, and was featured in the online National Geographic magazine article, “Exploring Characteristics of Prodigies”. Most recently, Gavin performed excerpts of Rachmaninoff’s Rhapsody on a Theme of Paganini with the Detroit Symphony Orchestra.

George studies piano with Dr. Sun Min Kim and is a previous student of Antonio Pompa-Baldi. He has participated in masterclasses with Menahem Pressler, Ann Schein, John Perry, and Boris Slutsky, among others. In addition to his musical endeavors, Gavin is a voracious learner and National Merit Finalist.
www.gavingeorge.com