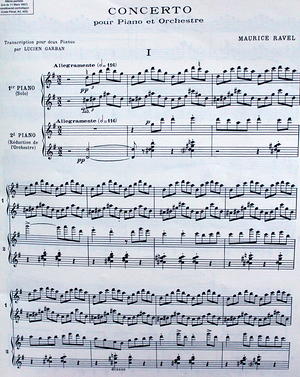 Usually, when I think of a setting that inspires a composer’s next masterpiece, I imagine, perhaps, a secluded mountain cabin or sunlight streaming through a misty pine forest. The idea for Maurice Ravel’s Concerto in G Major reportedly came to him on a rather slow train ride. While later stationed in Germany during World War I, he almost abandoned the unfinished piece when he forgot the manuscripts in Paris. Luckily, he managed to retrieve them and resume work. Ravel had been touring in America in the time before he finished the Concerto in G Major, and his exposure to American jazz manifested itself in his composition. When he finally finished it in 1931, his plan was to premiere it himself. However, health complications and composing the remainder of the Left Hand Concerto prevented him from doing so. Ravel instead conducted the premiere performed by Marguerite Long and Orchestre Lamoureux.

Ravel once said, “The music of a concerto should be…lighthearted and brilliant”. The first and third movements of his concerto in G Major embody this down to the beat. Right from the start, there are energetic, crystal runs mixed in with suave interludes. As the first movement nears its end, Ravel includes a beautiful cadenza, cleverly tying in recurring themes from the rest of the concerto while managing to prepare it for the end’s more rhythmically pulsing passages and big bang! The third movement is full of dazzling virtuosic runs amid fanfare from the orchestra, adding even more glimmer to an already brilliant piece. I think the most stunning part of the concerto is the 2nd movement, which is characterized by the type of ageless beauty and depth that spans time without boundary. After my first lesson on this movement with my teacher, I recall remarking that this piece makes me feel as if there’s hope for humanity; it is one of those heart-touching works of art that penetrates deep into your soul. The development section in particular builds to such a beautiful climax that I sometimes begin playing this part in the middle of practicing another section just to feel its intense emotional pull.

The overall refreshing modernism and freedom of this piece gives it a more avant-garde feel to me. With this came new techniques that I needed to learn in order to execute it to its maximum potential. Some of these, while challenging, are a treat to play. One such example lies in the latter half of the third movement, where the music dictates that the right and left hands co-play a sinuous passage, alternating positions on top of each other and bringing out unorthodox chord positions so as to hear the melody. Needless to say, this required extra practice time, but it gives me even more satisfaction when I am able to execute the passage perfectly.

The Ravel Concerto in G Major is such an exhilarating and flat-out fun concerto to perform. This, coupled with the pure beauty of the second movement, makes it one of the most enjoyable I have played thus far in my career. I am very excited to perform it with the Lexington Symphony Orchestra on September 10, 2016.